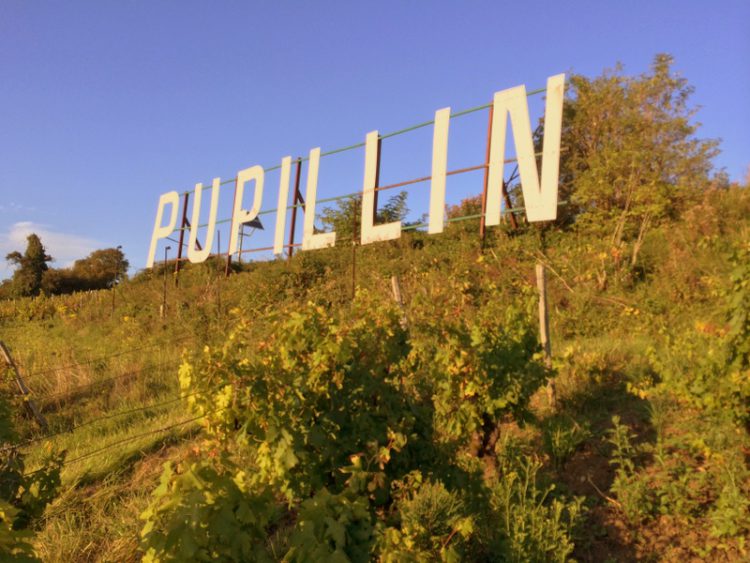 Pupillin is a tiny village that lies at the heart of the Jura wine region. Here, the Ploussard grape variety is king, producing light, flavoursome wines of very high quality.

There are three red grape varieties in the Jura – Trousseau, Ploussard and Pinot Noir. Trousseau is a light, expressive grape variety that is planted widely in the Jura but reaches its highest expression in the village of Montigny-les-Arsures where Michel Gahier make his delectable wines.

Pinot Noir is well known from Burgundy, Alsace and elsewhere and the wines made from this grape in the Jura are particularly interesting and distinctly different from the wines of Burgundy which is only an hour by car from this remote region.

And then there is Ploussard which, like Trousseau, produces lighter styles of red wines around the village of Pupillin and slightly more weighty wines near Montigny les Arsures. Just to confuse matters it is also known as Poulsard. And to confuse even more, there is also a white variety of Ploussard, but it is very rare.

One of the attractions of this grape variety is the fact that there is not much of it! The planting of Grenache in France, for example, extend over nearly 100,000 hectares whereas Ploussard just tops 300 hectares as can be seen from the graph below. 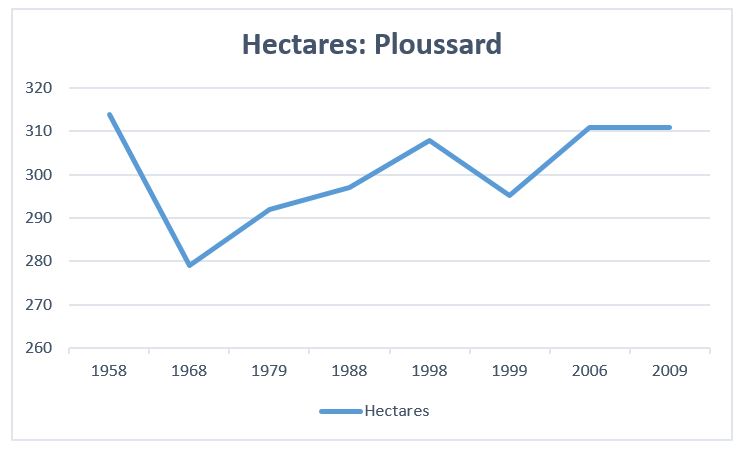 The wines made from this grape are light, fruity (cherries), fresh and, usually, quite minerally. The lightness of colour is due to the very thin skins with low levels of phenolics that give colour to the wine.

First we should tell you a little about the tiny village with the large personalities where Ploussard is to be found. When you approach Pupillin (usually by driving up the hill from the town of Arbois) the first thing you see is a new sign with the names of some of the winemakers who live in the village. Front and centre on that sign are the words:

which translates as Pupillin is the world capital of Ploussard. 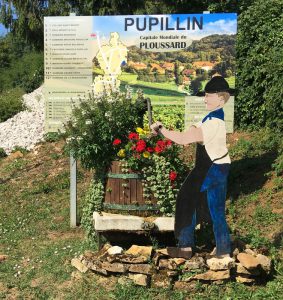 So, you know you are in the right place if you are looking for Ploussard. The reason it flourishes here is because of the rolling hills behind the village which contain some of the most complicated coloured marl that you are likely to find anywhere.

Marl is a limestone influenced rock type that Ploussard has a particular affinity for. The marl here is a combination of siltstone and limestone which comes in a variety of colours such as blue, yellow and white.

When you visit one of the winemakers to attend a tasting, they will invariably offer the red wines made from Ploussard and Trousseau before they offer you a taste of their white wines. The reason for this is that the red wines are mainly light, delicate and delicious while the white are strong, sometimes oxidative and also invariably delicious.

We find them quite compelling. We love Philippe Bornard’s La Chamade and also his non-sulphured Point Barre which is delicate and silky and a delight to drink. We also like the quite different style of the Ploussard produced by Michel Gahier. This is a more structured wine that exhibits elegance and persistence.

So where did the grape originate? Most authorities agree that it is a native of the Jura region.

The leaves of the vine have five distinct lobes which are quite pointy. 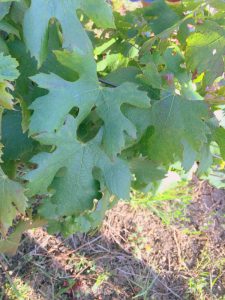 The grapes are quite light in colour as can be seen from the photo below. 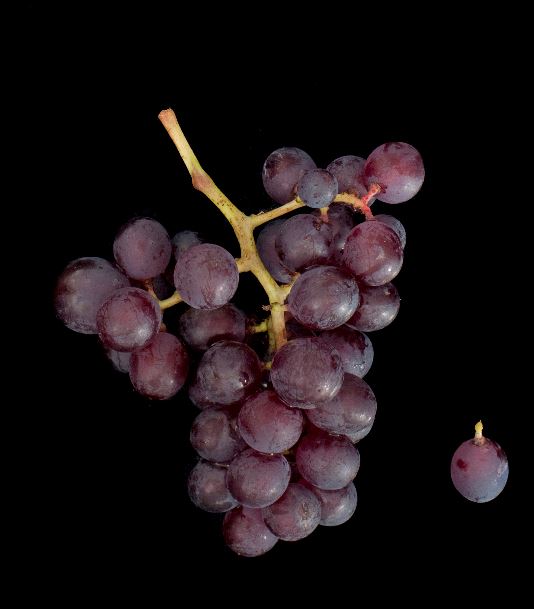 We note that Trousseau has been successfully exported to other parts of the world such as Spain and Australia where it is known as Bastardo. However we know of no plantings of Ploussard outside the Jura.

And we should end by saying that Ploussard is also turned into a sparkling wine by Philippe Bornard and it is one of our favourite wines of all. This is the delectable Tant-Mieux that light, fizzy, slightly-sweet sparkling wine that is low on alcohol but high in the gluggability stakes. Sadly, it’s out of stock at the moment.