Julie Brosselin’s Languedoc domaine is quite new, although she has plenty of experience, having previously been a partner in Le Petit Domaine. We met her because she and Ivo Ferreira from l’Escarpolette have recently become life partners and, once we tasted her own wines when we were tasting Ivo’s in July 2017, it took a few micro seconds to decide that we’d like to import hers as well. 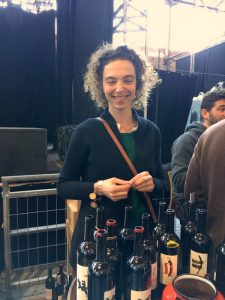 It was the 2015 vintage of Mata Hari, which is a macerated Grenache Blanc, which sealed the deal and we’re pleased we were able to secure 2 dozen bottles of the same vintage for this shipment. We tried it again while we were in France in July this year at the same time as our order was on the water while eating at the wonderful Auberge de Chassignolles. Drinking it with delicious food further confirmed our decision.

Her wines generally are on the lighter side, with white wine mixed into some of the reds to make them more interesting and lighter to drink. But even her reds without the addition of white wine are still supple, light and delicious. 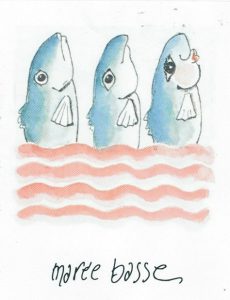 Marée Basse 2017 is actually made with fruit from both Julie and Ivo’s vines. It’s a blend of Grenache Blanc (Julie) and Grenache Noir (Ivo) which were macerated together for 7 days. It’s a light red but with enough structure to go well with food. It would be fine just to drink too!

This is a good example of how they combine the best properties of red grapes and white grapes to create delicious, easy drinking wines.

This will go very well with a range of food such as charcuterie, chicken dishes, sausages, vegetable dishes such as the delicious salad we tried at Franklin in hobart that was a composition of exciting organic vegetables served on a bed of cashew cream that we were encouraged to eat with our hands. It will even enhance seafood dishes – or maybe we just think that because it has a picture of three fish on the label! 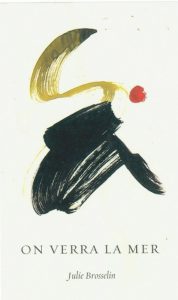 On Verra La Mer is a light, juicy Cinsault with lots of charm. It weighs in at only 12% alcohol meaning that it stands apart from the many strong, alcoholic wines that are produced in the Languedoc area.We are really enjoying Cinsault-based wines from the Languedoc. This grape variety is better known as one of the supplementary grape varieties that is often used to make some of the best wines in Châteauneuf-du-Pape in the southern Rhone.

This wine is not powerful like those in the Rhone, it is much lighter and far more suitable for pairing with food. In fact, it is a perfect expression of a drinkable Cinsault wine.

This wine goes particularly well with charcuterie, braised dishes such as Osso Bucco and dishes cooked over fire. But, in reality, it it so delicious that you can drink it with just about any food. 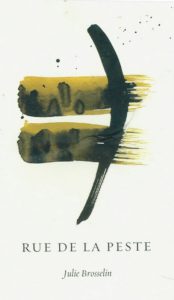 Rue de la Peste is a blend of Carignan and Syrah which at 12.5% is a fresh wine that captures the spirit of the Mediterranean so much better than the heavier, high  alcohol wines for which the Languedoc is better known. This wine has good structure but does not dominate food due to Julie’s light touch in the winery.

Montpeyroux, where Julie lives, is quite close to Saint Chinian which is the “spiritual” home of the Carignan grape variety. It is in the rugged terrain around this area where the grape variety thrives.

The Syrah gives it strength on the finish to ensure that this is a well-rounded wine which has been cleverly blended to bring out the best qualities of each of the varieties.

This is a wine for enjoying with food as it has structure and strength while still showing a lightness that makes it so appealing. 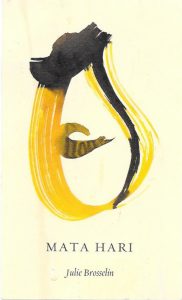 As we mentioned in the introduction above it was the 2015 vintage of Mata Hari, which is a macerated Grenache Blanc, which convinced us to import Julie’s wines and we’re pleased we were able to secure 2 dozen bottles of the same vintage for this shipment.We tried it again while we were in France in July this year at the same time as our order was on the water while eating at the wonderful Auberge de Chassignolles. Drinking it with delicious food further confirmed our decision.

This is a beautiful orange (skin maceration) wine with stunning control of the tannins and other polyphenols that are produced from the skin contact with the juice. It has a limpid orange colour, beautiful phenolics and will match with just about any food you would want to eat!

We love this wine, but unfortunately so did everyone else and it has sold out on its first showing!