Alice and Olivier are well known for their pure, natural wines that they craft from small plots in Chablis, Chitry and the little known Saint Bris appellation. Their wines are highly sought-after in Paris and New York so we were delighted when they agreed to release some of their dwindling supplies for Australia.

They have been tending their organic vines near their village of Courgis for over twenty years now. Courgis lies north west of Dijon so it is quite a cold area leading to low yields from the vines. Both Alice and Olivier share the winemaking as they work together to craft these stunning wines.

All the grapes are picked by hand and only natural yeasts are used to ferment the wines which are matured in foudre and oak barrels that are typically one to four years old to ensure that the oak flavours do not dominate the fruit.

These wines sell out very quickly. We only get a limited allocation so there is a “de Moor season” where you are able to buy their wines.  But the season is short!

And just a note about Le Vendangeur Masqué on some of the labels. Over the past three or four years Alice and Olivier have been hit by frosts and hail on a number of occasions which has severely affected their harvests. They have therefore been forced to buy grapes from friends in the south so they have enough wine to survive. The grapes they buy always come from friends who grow the grapes organically and biodynamically and they apply their well-known winemaking skills to these grapes. However, in France if you buy grapes from other producers you must do it through a different company- hence the different name!

And by the way! The lovely art work on the labels is drawn by Olivier himself. Very talented!

This is a flinty, minerally, highly-textured Chardonnay from their vineyard called Clardys which lies in the famous Chablis appellation. The wine benefits from the limestone in which the vines thrive. The Clardys sits alongside the Rosettes as one of the de Moor’s top wines. 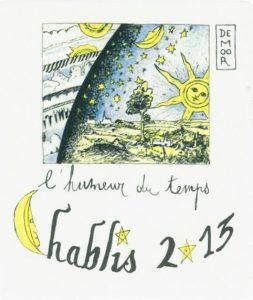 Like the Bel-Air et Clardys, this is a flinty, minerally, highly-textured Chardonnay from another of their vineyards which lie in the famous Chablis appellation. The vineyard is about 1 hectare.

The wine benefits from the limestone in which the vines thrive. This wine has all the characteristics that you expect of a good Chablis – it is flinty, elegant, energetic  and very persistent.

It also exhibits a lovely mouth feel and texture. We like this wine a lot – it is made with love and care by Alice and Olivier in their winery near their house.

Saint-Bris is a relatively small and relatively unknown recent appellation (created in 2001) in the Burgundy area covering the communes of Chitry, Irancy, Quenne, Saint-Bris-le-Vineux and Vincelottes.

It is notable because the vast majority of white wines in Burgundy are made from Chardonnay with some being made from Aligoté, however this appellation permits only the use of Sauvignon Blanc and Sauvignon Gris, both of which are in this wine.

The de Moors have a vineyard within the Saint Bris boundaries and make this richly-textured Sauvignon Blanc that is highly regarded by aficionados of this grape variety. It is a very rare wine and highly sought after. We only have a very small allocation.

This vintage, however, the de Moor’s have not been able to use the appellation this year because the appellation rules require that the wine has 4 grams or less of residual sugar and this year it came out at 5 grams, therefore they gave it a name where they remain “silent” about the origin!

Chitry is a white wine appellation that lies adjacent to the Chablis appellation and shares with it the wonderful limestone terroir.

Those in the know snap up this wine as it has all the characteristics of a Chablis but at a lower price. It is a pure Chardonnay and is classified as a Burgundy Village wine (the village being Chitry). The 2015 was a particular good vintage in Chitry even though the the high temperatures and lack of rain experienced throughout France in that year reflected the Chitry experience.

The 2015 was a quite a good year year. The weather was fickle. It rained a lot and there were frequent hailstorms. However, luckily, September was quite warm and the grapes that did manage to survive ripened very nicely and the wines are of a very good quality.

Aligoté is the second white grape of Burgundy and wine made from this grape is popular locally but not seen much outside of France. In the right hands it can be a wonderful wine and this one certainly is. We‘ve long been fans of this grape and this wine has been receiving accolades on both sides of the Atlantic.

This wine is made from purchased grapes but, as with everything they make, it is a sensational wine. They have sourced a variety of grapes from around France including Clairette from the Drôme, Riesling and Pinot Blanc from Alsace, Aligoté from their own vineyards, Chardonnay from the Ardeche and Sauvignon Gris from just north of Roanne!

The de Moor Aligoté is a beautiful drink and the Plantation 1902 is a stunning drink! This wine is made from very old vines – vines that are unusual because they pre-date the ravages of phylloxera. The vineyard is near the village of Saint-Bris-le-Vineux and covers just half a hectare. The records show that the vineyard was planted in 1902 – hence the name. This is a rare wine showing great elegance and length. The Australian allocation is very small so you will need to get in early for this one.

Once again, due to the ravages of the frosts and hail the De Moors have been forced to buy certified (by Ecocert) organic grapes from friends in Burgundy to produce this delightful white wine. This is a lovely Burgundy produced from grapes that have grown on very good clay and limestone terroir. The wine spent 12 months in old barrels before being transferred to tanks for settling prior to bottling.

This wine does not come from fruit picked from the de Moor’s vineyards but from a friend who has vineyards near the town of Courgis in the Chablis and Chablis Premier Cru appellations. These vineyards are tended organically and are currently in conversion to achieve organic certification. They also picked some grapes from a vineyard they are now renting and converting to organic agriculture.

The wine has been made by Olivier de Moor, however, to his exacting standard.

This is a fine Chablis with lots of fruit showing. It is well-rounded, fresh tasting and has a streak of acidity and a long finish. A lovely wine to enjoy with a meal.

It is a great example of a pure, elegant Chablis at a very reasonable price. 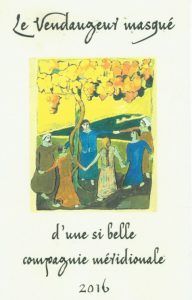 This cuvée is made from grapes that they had to buy from friends in the south of France who were not hit by hail and frosts as were the de Moors (again).

But what a lineup of talented winemakers provided grapes to help the de Moors survive? And note that our description below varies slightly from the description on the back label as not all on the contributors appeared there.

The juice was then transferred to tanks to allow any solids to settle before bottling on the 7th November 2017.

We are delighted with this wine. It is fresh, it is vibrant, it is electric! 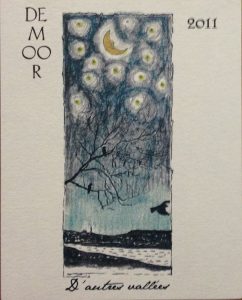 This is a wine made from late picked Aligoté grapes (picked in October) from a small parcel (Kimmeridgean limestone) of vines in the Chitry district that shows that Alice and Olivier can do things differently but still turn out fantastic wines.

The winemaking is similar to the other wines made from this grape. The wine is very clear even though it has not been filtered or fined.

There are 9 grams of residual sugar but this is tempered by the piercing acidity typical of the area around Courgis and Chitry.

This wine could be drunk as an aperitif or as an accompaniment to seafood, cheese or even a savoury dessert.