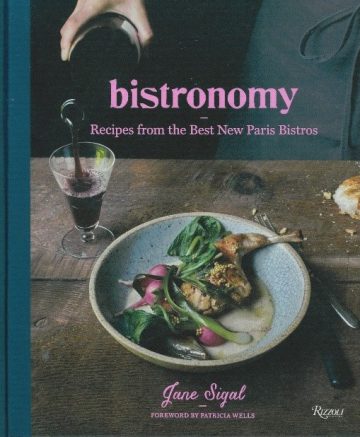 So why are we reviewing a book about Bistronomy in Paris? Apart from the fact that our general preference is to eat bistro food rather than tricked up, contorted food in Michelin-starred restaurants there is a connection to bistronomy through the wine. Almost every restaurant that features in the book has a wine list that is either completely based on natural wines (nearly all of them) or else is heavily weighted towards them.

Our regular visits to Paris always began with a visit to James Henry’s Bones, a place which features strongly in the book. We would go to Bones both for the sublime food and the very strong list of natural-only wines. Unfortunately James closed Bones so we have had to change our habits! Now we have to make a decision. Will it be one of the newer offerings such as Le Servan, Clamato, Ellsworth, Clown Bar and Martin or will we go to an old favourite such as LeDauphin, Le Baratin, Le Verre Volé, or l’Ami Jean?

Notice that we haven’t mentioned our favourite Parisian restaurant Septime – we always try to go there on our last day in France because it ensures a fitting finale to the trip. All of these restaurants have a strong natural wine program and all are in the book except for Le Baratin.

Jane Sigal has assembled a book of recipes from the new-wave restaurants in Paris that have had such a positive effect on the dining experience in that city and re-established Paris as one of the great dining destinations of the world.

However, it is not just a book of recipes. The author chronicles the rise of restaurants serving bistro food with a gastronomic sensibility (from where the word is derived). But there is another layer in the information provided which is important.

She also chronicles where the chefs worked before they opened their restaurants. Almost without exception the chefs have impeccable credentials from serious restaurants such as l’Arpege, La Meurice, Louis XV, l’Atelier du Joël Robuchon, Troisgros and Pierre Gagnaire.

They all bring much of the precision and love of great ingredients to their new ventures, as well as the discipline that’s required to run a great kitchen. What is missing are the most expensive ingredients and the frippery and the high price tags. It is possible to eat in many of the restaurants mentioned in the book for around 30to 40 Euros and considerably less at lunch time.

The book would not be complete, of course, without paying due respect to Yves Camdeborde who setup La Régelade in 1992 after leaving his prestigious position at the Hôtel de Crillon. His new restaurant was a bare bones affair always with a queue out the door. However the food he served was a different matter. The waiting staff passed around large terrines from which the diners cut their own tranche. Offal was ever present. Desserts were not fussy, but were delicious.

Camdeborde’s success saw other high-end chefs follow his lead and open similar establishments such as l’Ami Jean (home of the best rice pudding on the planet) and Café Constant.

At the same time pioneers of the natural wine movement such as Jean-Pierre Robinot (l’Angevin), Nicolas Carmarans (Café de la Nouvelle Mairie) and Pierre Jancou (La Crèmerie) were opening wine bars featuring natural wines and staying open late. There was a natural synergy between these late night bars and the chefs who were beginning the neo-bistro revolution, so they started stocking these interesting new wines that were taking hold in Paris.

When Jancou later opened his own restaurant, Racines, he not only brought with him the natural wines that he had served at his previous bars, but also the very best produce for the kitchen. We still fondly remember the quality of the Colonnata lardo that we always started with and the quality of the organic vegetables that he sourced from Alain Passard’s garden.

So, try out some of the recipes such as the green lentil soup from Camdeborde with his trademark tapioca or the leeks vinaigrette with vin jaune sabayon from Frenchie or tuna with raspberries and shaved golden beets from Clown Bar, charred squid with boudin noir, peas and herb oil from Australian Shaun Kelly who used to cook at Au Passage and Yard or the amazing dish of cashew-stuffed guinea hen with cauliflower steaks that Le Servan chef Tatiana Levha cooks in a single skillet.

There are over 100 recipes, making this book an excellent purchase. It is also an extremely useful book for planning a trip to Paris!