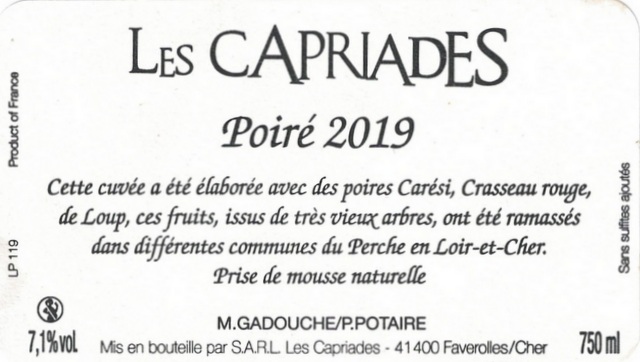 This is a story about the revival of Poiré (pear cider) in an area that few people remember it being produced. If you say French cider then it is likely you are talking about a cider from Normandy. However 200 years ago the area of the Loire Valley around the town of Vendôme was an important area from the production of high quality cider drinks.

We know this general area quite well as a number of our producers are in or near this general area covering the Loir-et-Cher and Sarthe départments. These départments sit north of the A10 between Orleans and Tours which we have driven along dozens of time on our way to visit Jean-Pierre and Noella Robinot, Hervé Villemade, the Plousseau family at Domaine de la Garreliere and, of course, Pascal Potaire and Moses Gadouche from Les Capriades who this story is all about.

Pascal, however, did know this and had been thinking about pear cider for a few years. Eventually he was chatting with Guillaume Focault of Restaurant Pertica which lies between two arms of the Loir River (note the spelling – it is a tributary of the Sarthe River which in turn, flows into the Loire River near the exciting town of Angers) in the pleasant town of Vendôme. We had enjoyed a meal at this restaurant a few years ago on one of our wine buying trips in the region.

Guillaume suggested that he talk to Estelle Mulowsky who worked in the wine industry having a number of the beautiful Percheron draught horses which she used to help vignerons plough their vineyards and harvest their grapes.

She told Pascal that she knew of many orchards in the area where the pears were left on the tree to rot or fell to the ground to be eaten by animals. She offered to harvest the pears if he made the cider!

Pascal readily agreed as he, like many other winemakers in France, was anxious to diversify his operation to ameliorate the devastating damage that was being caused by climate change induced frosts and hail.

The pears that she targeted were old varieties such as Carési, Crasseau Rouge, and Poire de Loup. These were harvested from very old trees; some that were over 200 years old. Pascal went ahead in 2019 with the knowledge he had gained from making a small amount the year before, and made an absolutely delicious Poiré using the three varieties mentioned above.