Samuel Boulay makes beautiful, pure wines in the wilds of the Ardeche region from vines that have been organic for a long time.

Samuel Boulay was originally from the Loire Valley but recently he has moved to the Ardeche to take over some of the vineyards run by Gilles Azzoni for the past thirty years.

We first tried his wines at a salon in the tiny village of Chassignolles in the Auvergne and we loved the wines that we tasted.

So, recently we undertook the very pleasant drive from Provence up into the Ardèche. The road provides spectacular views, first of the Rhone Valley, then the deep gorges carved into the mountains by fast flowing rivers in the Reserve Naturelle des Gorges de l’Ardèche and finally the meandering valley of the Ibie river with its characteristic white limestone rock deposits beside crystal-clear pools. 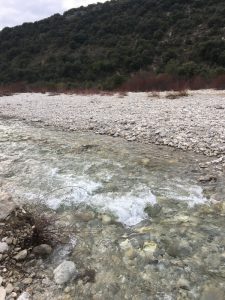 The Ibie River in the Ardèche

Samuel lives in the tiny village of Les Salèlles right beside the Ibie river. He has vineyards right beside his house and more down by the river with still more on the other side of the heavily forested hills.

We arrived to a scene of rural self-sufficiency. Honey dripping into a bowl from hives at the foot of the nearby forest, healthy chooks hunting for scraps of food in the grass and dogs lazily enjoying the winter sunshine. 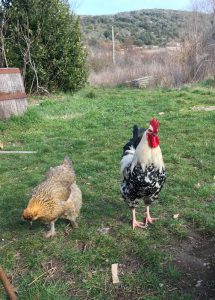 We only have a few dozen of each of these beautiful and rare wines and they will be in heavy demand, so make sure you put your order in soon. 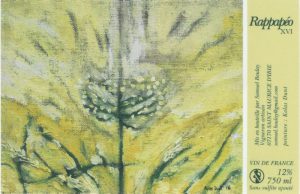 This delicious white wine from Samuel Boulay is made from 50% Roussanne and 50% Viognier. The Roussanne is sourced from 30 year old vines next to his house as well as some more from over the road near the picturesque river that runs down the valley.  The Viognier is also right outside his house running up to the primal forest that surrounds the vineyards in this wild and beautiful area of the Ardeche.Samuel has named this wine after a wildflower that grows everywhere throughout his property.

The vines from which the wine is made are cared for by Samuel in this amazing ecosystem where insects, dragonflies and butterflies are encouraged due to their beneficial effect in combating disease and pests.

This is a delicious wine that has settled well since it arrived in Australia. It is not big and oily as some wines made from these grapes can be. Instead it is delicate and elegant and a delight to drink. 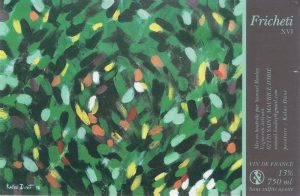 This amazing wine is aptly named. The term Fricheti is used when you prepare a meal from whatever is left over in the fridge.For this wine it was the grapes that were not used in the other wines that Samuel made in 2016.

Thus, this wine has some direct-press Syrah, some Alicante that was left on skins for a couple of weeks, some Grenache that accidentally underwent carbonic maceration as well as some Cabernet Sauvignon, Merlot, Viognier and Roussanne.

The result is a very elegant wine that is softened through the use of some white juice that has been added. We like it a lot.

Samuel made this wine from two of his favourite red grape varieties. The Cabernet Sauvignon grapes were sourced from his vines near the Ibie River which is quite close to his house. The Merlot vines are literally just outside his back door.

This is a very nice wine with a good backbone from the tannin. It gives the appearance of sweetness on the nose due to the presence of the Merlot, but it finishes quite dry. 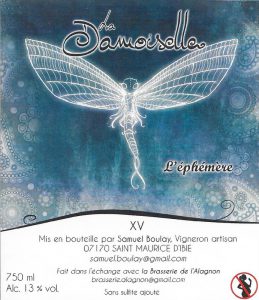 This lively white wine, named after the dragonflies that fly freely through the vineyard, is made from 100% Viognier with the grapes manually harvested from vines that are literally a few metres from Samuel’s house.

When we walk through his vineyards we see herbs and flowers and butterflies everywhere signalling the health of the soil and the general environment in this remote part of the Ardeche.

This wine is incredibly elegant without the excessively oily characteristics that typify some of the wines made from this grape in the northern Rhone. The wine unfolds beautifully in the glass to reveal flower, stonefruit and citrus aromas with a long, lingering finish. We recently drank a bottle of this wine over a week to see how it held up and it just kept getting better and better as the week progressed. Not bad for a wine that has had absolutely no sulphites added!

Samuel is a very special winemaker. 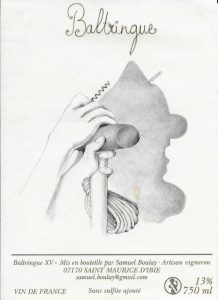 Like many of his compatriots in the French natural wine movement, Samuel loves to ascribe names to his wines that have many levels of meaning.

The name Baltringue seems to have originally come from the circus and refers to a person who organises the show but does not perform any of the feats. It also refers to someone who claims they can do anything but never actually gets around to it.

This red wine is made from around 95% Merlot with a small addition of Viognier. It is lively, fresh and very moorish with the Viognier adding a hint of stonefruit.

As with all of Samuel’s wines, this one has no added sulphites, but he manages to ensure that his wines do not fall apart once the bottle is opened.