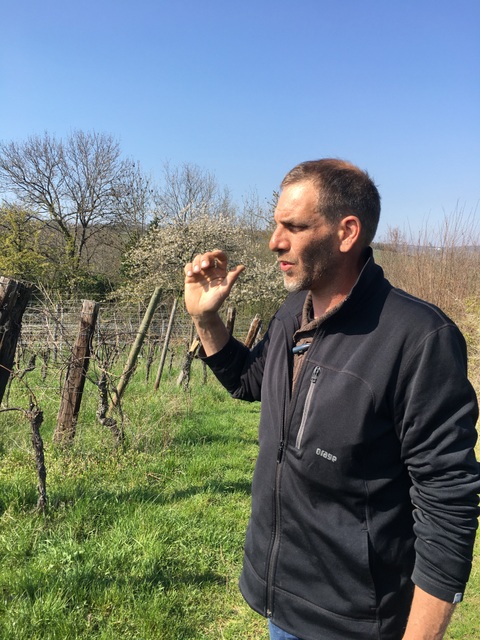 We first met Jean Marc Dreyer from the village of Rosheim in Alsace a number of years ago at a winter salon in the tiny village of Glaine-Montaigut in the hills to the east of the Auvergne city of Clermont-Ferrand.

It is a small salon, but we always meet interesting vignerons there and Jean Marc was no exception. We were incredibly impressed with the purity of his wines and his work with maceration that lifted the wines to another level.

Based on this tasting we asked him if he was interested in working with us and he agreed, but he didn’t have much wine to sell us at the time and also we think he wanted us to come to see him first, which is not uncommon amongst the winemakers we work with.

In the past twelve months we have visited him in his village of Rosheim twice and tasted the wines again and we are now in a position receive an allocation from the 2018 wines which we expect to arrive later this year.

Jean Marc has literally dozens of vineyards surrounding his village. Some of his vineyards contain long forgotten varieties that he is patiently looking after such as Abondance which is one of the last plots left in France.

The grape varieties that flourish in these soils include Riesling, Pinot Gris, Gewürztraminer, Auxerrois, Sylvaner, Muscat and Pinot Noir.

The photo above was taken in a parcel of Auxerrois, which is part of a so far three year old experiment where every third row has not been pruned. That will continue into the future with Jean Marc saying he thinks it will take the vines at least 7 years to fully understand their new life! You can see also his practice of planting trees amongst the vines.

In his winery, Jean-Marc has some wonderful old large wooden foudres where he ferments and matures most of his wines. Some of these are quite large holding thousands of litres of wine.

So, we look forward very much to the arrival of Jean Marc’s wines later this year as they are certainly very special.

If you have been lucky enough to try these wines in France and want to be notified of their arrival, please send us an email.