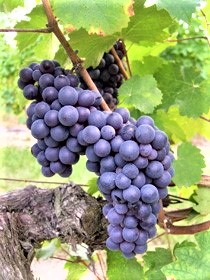 Pineau d’Aunis is one of those grape varieties that some people decry but others are passionately devoted to, including us. Our considered opinion is that there are absolutely no inferior grape varieties – there are just inferior wine makers. There is always a winemaker who can make a great wine regardless of the grape used.

And so it is with the obscure Pineau d’Aunis. First we will explore where the name came from. The first thing you notice is that the Pineau sounds very much like Pinot, however it is not related directly to the better known red grape. However, there is a similarity and that might explain why the names have similar derivations.

If you have a look at the photo below you will notice the similarity between the shape of the bunches of grapes and a pine cone.

Pinot Noir bunches have a similar shape so the word for pine in French ‘pin’ is included in both names. But what about the d’Aunis? Well it is thought that the vines were brought very early to the Loire Valley by salt traders who traded along the Atlantic seaboard and sailed up the Loire as early as the 9th Century. One of the areas where it was planted was just east of Saumur in the commune of Dampierre in the grounds of the Prieuré d’Aunis.

There are a number of vineyards around Saumur, in the Coteaux du Vendômois and in the Touraine that possibly pre-date phylloxera however in the 1950s and 1960s there was a rush to rip out traditional vines and replace them with the Cabernets to tap into international markets.

Luckily there were some who knew that this grape had an affinity for the terroir of the Loire and the only problem was overcropping. It gradually began to be restored to its rightful place even though the vines did not always get planted on the best slopes as these had traditionally been reserved for the revered Chenin Blanc.

More recently, growers such as Puzelat and Domaine Bellivière have led the revival of the grape variety and have been producing some amazing wines with it. The famous red wines of Jean-Pierre Robinot are all made from Pineau d’Aunis just north of the city of Tours.

It is interesting to see the way the area planted has decreased over the decades and then stabilised around 1999. We suspect that more recent figures would show an increase in the area given over to this grape as many of our producers are planting this grape variety to tap into the increasing popularity of Pineau d’Aunis.